↓ Skip to Main Content
Home › Economics › US Government Exporting Jobs To China! Is There Any Truth Behind Trump’s Comments?

US Government Exporting Jobs To China! Is There Any Truth Behind Trump’s Comments?

Trump claims he can reverse the trade deficit and bring jobs back home to the good ole USA. Given this is a 30+ year problem, the big questions are: is it true and if it is true, why hasn’t any other politician already tried this. Whether you agree with Trump and Sanders or not, this election is turning out to be fascinating. Elephants in the room that the political establishments of both the Republican and Democrat parties have strategically avoided talking about for decades (because of major bribes sorry “campaign contributions” from special interests) are now being aired in public. For the last 30 years the political elite in the US have been behaving like teenagers with an expense account and no parental oversight.

Right after WWII the USA was the manufacturing center of the world. Everything which was important in the industrialized world had the ‘Made in USA’ sticker on it. The US became a financial powerhouse and was the biggest exporter in the world. However, nothing lasts forever. The demise started with the Vietnam War and a president who didn’t want to live with the consequences. Johnson and Nixon spent too much on warfare and printed too much money to cover the gap. This resulted in a great deal of gold flowing out of the USA to keep the global financial system in balance. Instead of devaluing the US currency against gold and facing the music, the government decided to break its link to gold and unleashed currency warfare. A grand experiment then ensued based on false assumptions that permanent spending could be used to stimulate the economy. New financial models touted by a few PhD’s in the white house said the old rules of money had changed. We now know that was poppycock.

Most people know about the decline of the manufacturing industry in the USA but they don’t understand how it happened. Sure automation and technology advancements account for some changes. But with the continued spending and running a permanent deficit, borrowing more and more, not balancing the budget and spending without consequences you get an unbalanced system. As with nature, systems tend to balance themselves out. If there was an imbalance from a country importing more than it exported the currency would decrease in value to level things out. This would make goods cheaper to produce in that country and imports more expensive. Shockingly this didn’t happen because China and other low cost labor countries were happy to buy dollars and US govt. bonds keeping their labor cheap and imports down. This built their economy at the expense of the US. If the US government was not spending more than it received in taxes the system couldn’t have been gamed by other countries. There would not have been enough debt (government bonds) to allow China to buy the dollars it needed to keep exporting goods. US interests such as protecting jobs and the manufacturing sector might have thrived.

I find it funny that no one questions the trade deficit or wonders what its effect has been on the US, but they do care about buying the next high tech gadget or other consumer items at ever decreasing prices.

The fact that labor and manufactured goods have been going down in price globally has more to do with currency warfare than a loss of productivity in the USA. The Asian economies figured out that if they made their currencies weak they could easily be the lowest cost producer for goods and services and could undercut any US company. This drove manufacturing production for many goods overseas. They didn’t care about the pride of a strong currency.

Want to learn more? Check out some of my courses. The coupon code linkedin18 gives you a 50% discount as a thank you for reading my posts.

The graph above shows the ever increasing financial deficit which the Wall Street crowd will say doesn’t matter because other countries invest in the USA to balance things out. I have never heard so much tripe in all my life. The reason Wall Street says this is they make money on a carry trade that has been guaranteed to make money with hardly any risk. The second chart below shows the decrease in average wages and salaries in the US over the same period of time. Is it really one hell of a coincidence that the drop in wages and salaries as a percentage of GDP is almost identical, and mirrors the trade deficit. i.e. the total trade deficit is about 7% of GDP and the drop in wages (jobs) over the same period is about 7%. 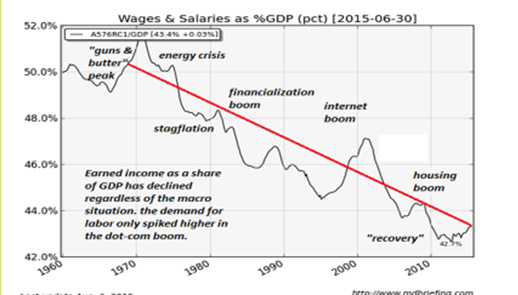 The reason the government wants the status quo to continue is if things changed they would have to stop their spending and there would be no money to give to the special interests that are currently running the USA. Right now the government has been operating with an unlimited credit card and rolling over the full balance from one year to the next. As we all know if we do this in our own lives it causes a lot of pain and distress. The real life effect is that the millennial generation has been sacrificed to fuel the lifestyle of the baby boomers. So it comes as no surprise that people are starting to support political candidates that would once have been complete outsiders because things have become so obvious and noticeable to many people even if they aren’t able to truly explain why. They just know one thing and that is the main stream parties have been out right lying to them for their own personal gain.

In future blog articles I will right about the consequences of the deficit; the scariest of them all is the fact that we have given China a weapon to nuke the US economy because they own 25% of all US government debt, not to mention they own a lot of land in the US.

Enter your email address and subscribe for free to get these articles sent to your email.

5 comments on “US Government Exporting Jobs To China! Is There Any Truth Behind Trump’s Comments?”