↓ Skip to Main Content
Home › Economics › The Great China Bubble: If It Bursts What Happens To The US?

The Great China Bubble: If It Bursts What Happens To The US?

There is a strange global phenomenon related to economic bubbles. When excess is at its peak someone always wants to build the tallest building in the world. In the US the first and most dramatic case was when in 1929, Raskob and his partners bought a parcel of property at 34th Street and Fifth Avenue to start building the Empire State Building. At this point in time the US was the epicenter of a global economic bubble and the start of the Empire State Building signaled the start of the great depression. In 2010 when the Burj Kahlifa, tallest building in the world located in Dubai, was completed, the Dubai economy collapsed.

The second tallest building the Shanghai Tower has just been completed in China and if you look at the real-estate market in Shanghai it has increased over 600% in the last 15 years. China also has 5 of the top 10 tallest buildings in the world, and has several more under construction. The first cracks in China’s economy have just started appearing. 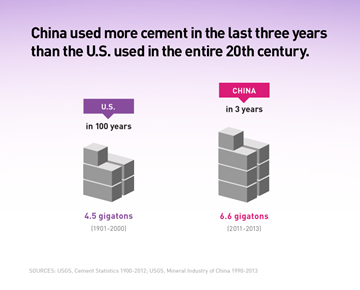 All this construction means that in China, 3.3 houses are being built for every 1 house that gets sold. It’s funny but when I hear about this kind of thing it’s always accompanied by a whole bunch of commentators saying, “this time it’s different because….” Just before the US subprime crisis the home ownership rates peaked at 69%. Today, in China home ownership rates are around 89%. Does China have a lot more credit worthy borrowers that the US? I don’t know if they do but that number seems to be amazingly high to me. What happens if the oversupply starts to cause prices to drop like they did in the US when speculation in California, Florida, Arizona and Nevada caused the US market to crash with devastating consequences?

Many people ask “why should I care? China is a long way away.” In 2008 when the subprime crisis hit the US it took out the economy of several countries. The biggest example was Iceland which became officially bankrupt. This happens because the global financial system is becoming increasingly more connected and money flows from one market to another passing on the risk in the process.

In Seattle, Vancouver, and San Francisco it seems like everyone is talking about Chinese buyers paying all cash for property in North America. This is definitely the smart money that understands the risk and is getting money out of their country by buying foreign assets to protect their gains. Currently, a large percentage of the high-net worth people in China want to get some or all of their money out of the country. This flow of money is driving prices to artificially high levels in key coastal markets like the ones I listed above. If the government decided to stop this money flowing out of the country these buyers would disappear overnight. The impact would be catastrophic, rippling through the markets where the Chinese are heavily invested. Markets could then start falling almost overnight. Even if the government doesn’t stop money flowing out, a crash in the housing market in China would have the same effect. We live in interesting times, if you want to know more, I created a course on Udemy to help people understand the risk and how to protect yourself.

0 comments on “The Great China Bubble: If It Bursts What Happens To The US?”

1 Pings/Trackbacks for "The Great China Bubble: If It Bursts What Happens To The US?"