Today the FDIC and the FED jointly announced that 5 of the biggest US banks are in a precarious position and failed their audits. In creating a bank that is “too big to fail” a bank can take more risks and historically the government bails them out. So, bigger than life banks take big risks and hope to fall back on being bailed out by the government – they don’t have a plan! They are relying on the government! This helps explain why the Big 5 failed part of the living will request.

Today’s announcement means that the banks have kicked the can down the road again till just before the election. Given the fact that most of the economic data is pointing to the fact that we are starting to enter another recession the question is – is all this too little, too late? No wonder Sanders, who is on the Senate banking committee, and Trump, the Entrepreneur & political outsider, have started speaking out.

Who are the problem children?

This isn’t really a surprise given the fact that Hank Paulson, the ex-Goldman Sachs CEO, who ran the treasury in 2008, forced the consumer banks to merge with investment banks. Thus, many strong solvent banks’ balance sheets were destroyed when they merged with bankrupt investment banks. Funnily enough, the institutions that created the crisis were bailed out and in the process Wall Street preserved their mega bonuses.

Given the amount of toxic assets that banks are still hiding on their books from the prior crisis and their continued use of excessive leverage, it’s not surprising they failed their impossible homework assignment.

In days gone by, banks used to have enough capital invested in the stocks and shares of their bank to act as a counterbalance to using excessive amounts of leverage in highly risky activities e.g. shareholders assumed the risk of losses and banks were always afraid of a bank run. However, thanks to the Clintons, the work of the best financial mind in US politics (Senator Carter Glass) was abandoned prior to the 2008 meltdown. It’s not surprising Hillary received a $675,000 payment from Goldman (bribe or speech payment?), because many of the checks and balances were removed. Carter Glass is probably turning in his grave.

The problem with the whole mess is that the banks have been one of the worst offenders in the stock buyback stampede I talked about in my last blog article.

Click here to read. In short, banks and many corporations borrow money to buy back shares to increase their stock price. This means that if the stock market falls it makes the bank and/or company even more unstable (shares count as assets on their books). In the past it never would have been possible for a bank to have $20 of loans for every $1 of assets they have because no one would have invested their money in the bank. 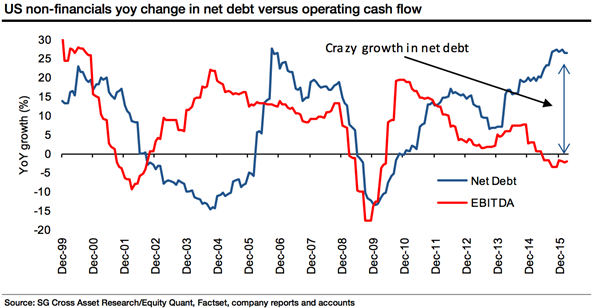 The thing about leverage is that when it gets high it doesn’t take much of a change to have a destabilizing impact. Oil debt and the Chinese currency wars (they just devalued the Yuan again today ) are just a couple of external shocks that could disrupt the economy. Yes, to reiterate, the Chinese government just devalued their currency again! Another tectonic force comes from Deutsche Bank which is on the verge of insolvency because of the negative interest rates in Europe (thanks Mario). No wonder the Germans are also upset with the European central bank.

Will the US banks survive without a government bail out the government can’t afford? Come back soon for the next installment of the “Fed Jeopardy Game”.

Want to learn more? Check out my economic courses:

The coupon code linkedin18
gives you a discount as a thank you for reading my posts.