The canary in the Stock Market coal mine has just died

Low oil prices are finally starting to take their toll. Over the last few weeks many of the major banks announced that losses due to bad loans in the energy sector were affecting their profits. Bank of America allowed $264 million for losses from energy debt and Wells Fargo, one of the safer more conservative banks with less trading exposure, has allocated over 7% or $1.2 billion of its loss reserve towards energy. (This might be the highest ever on Wall Street)

Junk bond yields have started to spike to levels that have not been seen since 2008. 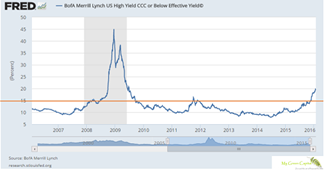 Ray Dalio, one of the smartest investors of all time, went on record saying there is “asymmetric risk on the downside.” And that the normal relationship in his all-weather portfolio has broken down. This means the advice that most financial advisors normally give is no longer true (i.e. have a properly diversified portfolio and you will weather a storm). What do you do when everything goes down?

The real truth is right now the storm hasn’t really hit. Major defaults have to happen or a big company has to go bust in an unexpected way to cause the storm. The thing that is different this time vs. 2008 is that it’s more visible if you know where to look because of the way bonds & commodities are traded on a global open market. The current drops are caused by the smart money taking their money off the table.

6 months ago at a financial conference I presented at in Los Angeles, I talked about the fact that the amount of debt that has been lent to many companies could be the trigger for the next market collapse. At the time, I thought that Glencore, a global commodities company, could be the next Lehman Brothers due to the drop in global commodities. This drop in global demand for commodities is primarily due to a slowing down of the Chinese economy. Which until recently was using enormous amounts of commodities. 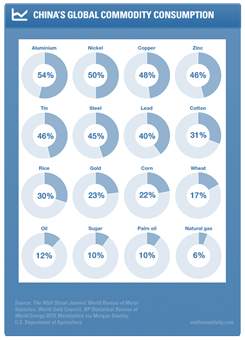 Whilst that could still happen, the real risk now is from large numbers of energy loans whether via bonds or from major banks defaulting. The Dallas Fed is so worried about that according to Zero Hedge it told the banks to suspend market-to-market accounting on energy debts effectively asking all the major banks to hide losses from their books; which is what they did after the 2008 crash in real-estate. Inferring that they think this is another subprime type blow up.

This is in effect like going to a casino and doubling down when you have just lost all your money because you have a chance you could win in back. That strategy rarely ends well.

The reason why debt defaulting will cause pain is it reduces the amount of money in the world. When the world money supply shrinks the value of the remaining money goes up and prices across the board fall. This is something that very few people alive today have ever experienced. The last time it happened was in the early days of the great depression. Click here for the blog post I wrote on this topic. It is a time of great risk and also great opportunity.

I also have a course on Udemy explaining the implications of current events.

Ray Dalio “If Assets Remain Correlated, There’ll Be A Depression”