How Germany lost WWII and won the currency war

The Euro has significantly strengthened the German economy and in the process has slaughtered the economies of the Eurozone P.I.G.S. However, the opening salvos of a new conflict between the European Central Bank and the German Government have been fired. Germany is the first government of the G7 to go on record and say the current negative interest rate and QE ad infinitum of the EU is crazy. How dare they say the emperor has no clothes. The big question is: why are the Germans the only ones saying this?

When I lived in Europe many people in southern European countries told me how their life savings had been wiped out by the move to the Euro. All of a sudden prices in the whole of Europe jumped to the German price for goods and services.

Because the Germans experienced firsthand the effects of hyperinflation at the end of WWII, the whole nation understood the dangers of living beyond its means. It was amazing to me when I lived in Europe the different attitudes to money and debt in the various countries. When you compare the Germans to the southern European countries, who are happy to borrow as much as they can and will worry about how to pay for it later, the Germans save up until they are thirty to buy their house out right.

This difference in attitude is why Germany is the last of the G7 countries with a true sustainable economy not requiring a pump up of financial engineering. It is also the reason for the escalation in tension between Germany and an Italian run European Central Bank. As a Brit living in the US, I would not normally be on the side of the Germans; however this is one case where we all should be on the side of the Germans. 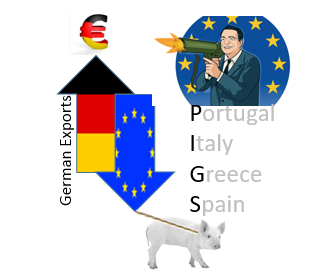 Want to learn more? Check out some of my courses.

How Economic forces impact real-estate:-The implications of current events and how to asses risk .

How to Invest in Real-Estate using your IRA:– How to put your retirement saving in hard assets like real-estate.

The coupon code linkedin18 gives you a 50% discount as a thank you for reading my posts.

In a normal economy without manipulation, as the Germans exported more to the rest of the world, their currency would have increased. This makes their goods more expensive, consequently making it harder for them to export goods and services to the rest of the world; thereby maintaining a balance. However, the moment the Euro was created the heavy government spending from the other European countries and their exorbitant debt levels, stopped the Euro from getting to strong, thus helping the Germans export more in the process.

What amazes me is that the other European countries were willing to sacrifice their economies and borrow huge amounts of money all for the sake of pride and a strong currency. Only the UK didn’t fall victim to the lure of the Euro because George Soros taught everyone in the UK a very valuable lesson and made a billion dollars in the process. He broke the Bank of England when the UK tried to tie the British Pound to the Deutsche Mark in the years before the Euro.

Global trade has been out of balance for the last 30 years ever since Nixon destroyed the financial balance of the world and left the gold standard. Things can’t stay out of balance forever and using debt to paper over the cracks eventually has its limits. This is why the world is starting to have economic problems and instability.

FYI: Whenever anyone says the economy is based on consumer spending this is complete BS. The reality is that a country relies on people borrowing more and more now to live beyond their means and thus sacrificing tomorrow. I will explain how and why this is the case in my next blog post.