↓ Skip to Main Content
Home › Economics › Do Trump and Sanders agree on how the Fed and Wall Street crippled the US economy?

Do Trump and Sanders agree on how the Fed and Wall Street crippled the US economy?

The current presidential race seems to be divided not between Republican and Democrat but between the candidates that have been bought by Wall Street and the candidates who haven’t. Despite being about as polar opposite as you can get in ideology, both Trump and Sanders agree that the current cozy situation between Capitol Hill and Wall Street has destroyed the US economy. What about Hilary Clinton who got paid $1.8 million from Goldman Sachs and the other big banks for speaking fees – would a $1Million dollar bribe affect your perspective?

The combination of crazy interest rates, and government incentives to borrow money and invest it in the stock market, have left many US companies saddled with a huge amount of debt. These large debt payments stop investment in the future, and make it hard for many companies to weather even a modest recession, making Wall Street a lot of money in the process. What do you think is better for the US economy, healthy companies that generate lots of jobs or a strong stock market? Capitol Hill has been voting for the latter for 30 Years.

The big question is how did things get this bad?

As a tax payer, I don’t like paying more in taxes than I have to and lower taxes always sound like a good thing don’t they? However, like everyone, I always invest time and effort into figuring out the most tax efficient legal way to receive income from my business. So when the government changes the rules those changes affect my decisions. The executives who run the major corporations of America are no different. One of the biggest drivers of income inequality in the US has been the difference between the long term capital gains tax for Stocks & Incentive Stock Options and the regular tax rate of employees. The math is easy – if I receive income through a W2 salary I’m taxed at the traditional 39% in tax + state tax (as gradually applied and if State tax is applicable). Alternatively, if I receive income through stocks which are considered capital gains – the tax rate is between 15 and 20% with potentially no State Tax… it’s an easy decision. This has led to an increasing amount of compensation being tied to stock market performance vs company performance. And yes the 2 payment structures are very different.

Over the last 20 years it has been very easy for corporate executives and corporate raiders to use a very simple tactic to boost the share price of their company. The low interest rates driven by the Fed allows companies to borrow money for effectively nothing and then buy back the shares of their own company stock. This in turn drives up the share price all the while the rich execs are saying they believe in the prospects of their company. In the process, they make a lot of money through Incentive Stock Options. Which by the way are taxed at a lower rate – the rich keep getting richer. With fewer shares in circulation it improves the company’s P/E ratio (price to earnings) earnings per share among other metrics destroying the stability of the company. This doesn’t drive real growth! The challenge comes when there are no more good borrowers left who want to play the game. Most of the rise in the stock market since 2000 has been driven by financial engineering and corporate stock buy backs vs real growth and stronger companies.

The true effect of this for the US population it to steal money / purchasing power from most of the population and give it to the top percentile, cripple companies with high debt levels without driving the innovation that grows the economy for everyone.

The chart below illustrates the growth in executive stock options. According the economist CEO’s in Americas biggest companies were paid 231 times more than the average worker. Prior to 1970 and the stock market games that started in the 1980’s it ranged between 41 and 63 times average earnings. This split is driving the wealth divide as well as the political divide.

The chart below shows how debt has driven the stock market growth. 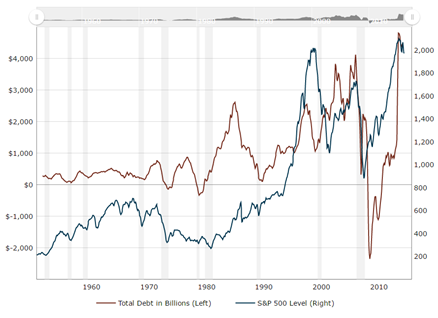 Unlike houses, companies are harder to value so it’s easy to pull the wool over people’s eyes. What has been happening is that debt levels have got so high in many companies that they can’t afford the repayments so what do they do, borrow more money to pay back the debt payments saying their company is worth more so they can borrow more. This is a scheme that Charles Ponzi would have been proud of. It can’t go on forever because eventually people will refuse to buy the bonds because the risk is too high for a small return. Values of companies never go up forever. If they can’t continue to borrow more, the whole house of cards will collapse. US companies have been sacrificed by the FED and the politicians in the pockets of Wall Street to keep the charade going.

The normal process that limits this is when the risk of default rises, the returns go up, however most of the central banks of the world have been trying to stop this from happening making matters worse.

The European Central Bank announced that it was starting to buy corporate debt in July 2015. Why would they do this? Europeans were starting to get worried about companies defaulting and the house of cards collapsing so the European Fed started buying bonds to stop people thinking there was a problem, thus keeping the interest rates on bond debt down.

If there is one thing I have learned over the years it is the fact that when markets get too distorted the eventual correction never ends well.Want to learn more? Check out some of my courses.