↓ Skip to Main Content
Home › Economics › Are we heading for another major financial shock?

Are we heading for another major financial shock?

I hear a lot of people talk about things feel different than they used to since the 2008 financial crisis. The key reason is we have moved from autumn to winter economic season. From 1950 – 2008 the USA was taking on more and more debt, until in 2008 the amount of total debt people had was more than the entire GDP of the USA. Once the debt got to a point that it couldn’t increase any more things have to change. What we are going through now is nothing new. Since the creation of central banks in Europe in the 1600’s, and then the perfection of the system by the Rothschild family in the 18th century, we have had a cycle that happens approximately once per generation i.e. 80 years (the span of an average human life). The last deleveraging happened in the great depression (1928). 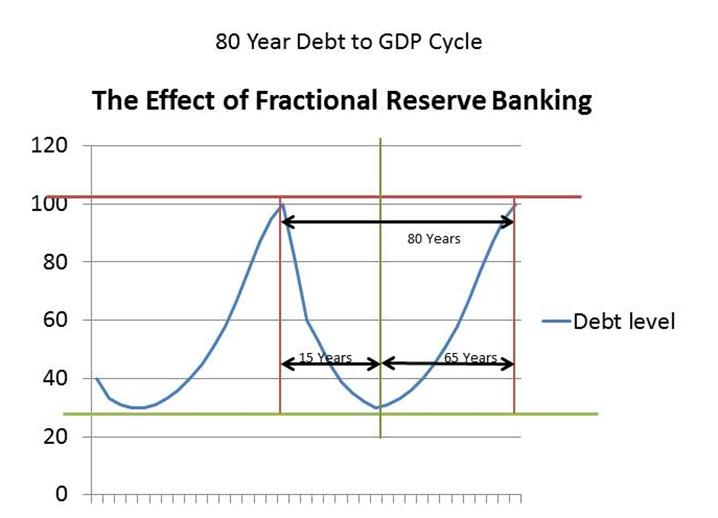 After a deleveraging period people get very cautious and slowly take on a little more leverage in their lives and in their businesses. People then get used to the risk and gradually take on more debt, until they get to the point of no return where society can’t pay it back. This is the point the USA reached in 2008. In order to get back in to growth mode the level of government and personal debt needs to drop significantly. This drop will change people’s appetite for risk and will allow room for growth again. Usually the de leveraging (reduction in debt) part of the cycle takes about 15 years which means that we are only halfway through, and will probably have a few more bumps in the road before this is over.

Deleveraging what is it?

Deleveraging is the reduction of debt, and is often accompanied by deflation (a reduction in prices).

In order for the debt level to be reduced one of 2 things need to happen. Debt needs to be written off through foreclosures and bankruptcy, (the government limited this through the bank bailouts) or expansion of the money supply (printing money QE) to reduce the value of the debt.

Money printing usually increases interest rates incenting people to borrow less and save more. The interest rate has been forced down to incredibly low level to incent people to continue to borrow and take huge risks, increasing the likelihood of another major shock to the financial system. The government does not want deflation to happen, but because of government debt can’t afford for interest rates to go up. This now means the risk in the financial system is higher than it was in 2008 it just needs a spark to ignite it.

More info on the cycle since the great depression is available at http://repec.umb.edu/RePEc/files/FisherDynamics.pdf

Ray Dallio has created a good video on the process at. http://www.economicprinciples.org/

One comment on “Are we heading for another major financial shock?”

1 Pings/Trackbacks for "Are we heading for another major financial shock?"